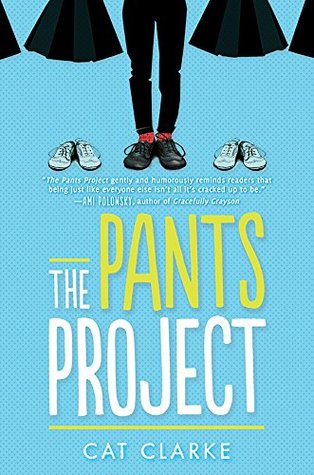 The Pants Project written by Cat Clarke
When Liv Spark finds out that his new school, Bankridge Middle School, has a uniform policy that says girls must wear skirts and boys can wear pants, Liv is infuriated. Although Liv may seem like a girl on the outside on the inside, he is a boy. He hates the itchy tights he has to wear with the skirt and thinks the policy is “Sexist. Dumb. Unfair,” in his own words. So Liv starts the Pants Project, his goal being to convince the principal of Bankridge, Mr. Lynch, to change the policy so that girls can also wear pants. Liv faces other problems as well, including two mean bullies, a dwindling friendship and family problems on his Mama’s side of the family. But Liv has a new friend at his side, Jacob and the two become strong advocates for the Pants Project. I could not put this book down, written wonderfully from Liv’s perspective, I loved seeing how the plot unfolded. I recommend it for ages 11 and older.