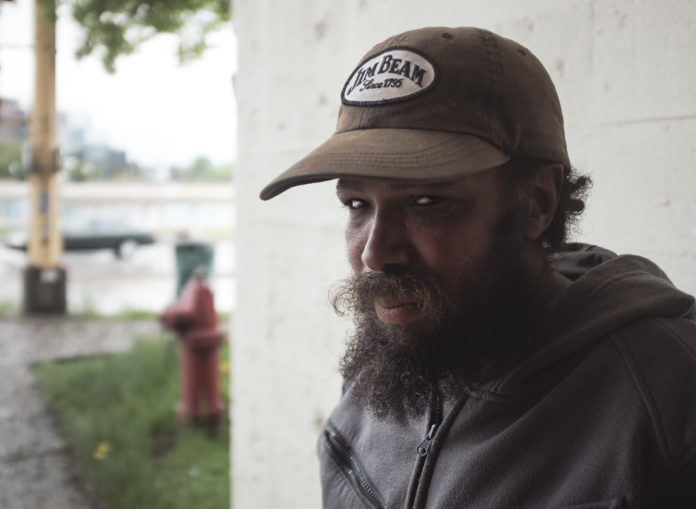 By Casey Ek
Gean, one of St. Paul’s unhoused residents took cover under a bridget near Shepard Road as nickel-sized hail pelted the city on May 19. An encampment along the roadway where some of his friends were posted up would soon be covered in the white spheres. A fire pit where those sleeping in the encampment burn trash would have to wait to be relit until the storm cleared up.
Sean, who did not give his last name, has been living on the street for around 20 years, he said. He is among the growing number homeless residents who have had to adjust to decreasing access to shelters as Federal COVID-19 relief funding is drying up across Ramsey County. Now, elected officials and shelter providers are pivoting to find solutions to the increasingly visible problem of homelessness in St. Paul.
Reflections from the street
Sean, who hopes to get a job in the near future, is meanwhile taking things one day at a time. He spoke to the Community Reporter about his life on the street and what his road ahead may hold as shelters like the Freedom House day shelter are closing. These selected questions and answers may have been edited for conciseness and clarity.
Do you ever get used to weather like this hail storm living out here?
It sucks at times. You get all wet get beat up by the storm.
Especially [because] I don’t have a tv to plug into a tree to watch the news[for the forecast].
Weather is an obvious challenge of living on the street. What are other challenges?
People want to fuss and fight and argue over the simplest things. All that stuff is material. Life is more important than the stuff you carry or have.

What does tomorrow look like for you? Do you find yourself thinking about the future?
Hopefully I wake up the next day. Everyday is not promised. I appreciate my life that I do have. It may be out here but still life is more important to me than anything else.
It’s really striking that you’re able to be so appreciative when people who have everything in life aren’t. Where does that gratitude come from?
I don’t have no clue on that one. I just like to be positive about things. For those people that are not positive about things, it’s stupid to be that way. Be happy with what you’ve got. Be happy with your lives. Life is a gift. It’s not a given. You can’t predict the future. I can’t. I’m just hoping I can live the next day.
There are a lot of words that describe people who live outdoors the way you do. There’s ‘unhoused’ ‘homeless.’ What word do you use to describe yourself and the way you live?
Free spirit. I’m a roamer. I like to roam the earth. There’s not that much more I can say about that.
I give everybody a chance. I’m a good, kind-hearted person.
Does it help to be kind living out here?
At times yeah, until a person takes a kindness for a weakness. Sometimes some people have taken my kindness for a weakness, so I just get away from them.

The road ahead
Already the Bethesda Shelter, formerly operated by Ramsey County that could accommodate up to 100 people, has closed its doors as a shelter. On May 8, The Freedom House Day shelter closed its doors in the wake of controversy in the West 7th neighborhood, leaving many to tented enclaves. At the county level, $53 million in emergency shelter funding is expected run out.
Director of Housing and Stabilization and Opportunity of Catholic Charities of St. Paul and Minneapolis said the federal dollars that poured in served as a revelatory boon that showed progress on the challenge of homelessness was possible.
Catholic Charities, which offers permanent and emergency shelter for the homeless in downtown St. Paul and beyond is seeing a surge of guests, Michels said. At the downtown campus, staff were used to seeing about 200 guests at one of the three meals they served throughout the day. Recently, that number has swelled to about 300. The largest upticks in guests at the downtown Campus, Michels said, is at the day shelter. On average the downtown campus serves 1000 people per day with various needs.
Michels said the swell in shelters that came as a direct result of temporary federal funding allowed many to get on the right path to bettering their lives because many did not have so much as a quiet place to sort their affairs before the funding. But while good came of the the funding, the pandemic also left many of St. Paul’s homeless in its maelstrom, particularly those in need of ongoing mental health services. In virtually every way life has only gotten harder for those living on the streets, Michels said.
“What we’re seeing is individuals who under the best circumstances have been disconnected [from services] for two years.”
At the downtown Catholic Charities campus and throughout St. Paul, tent encampments are becoming an increasingly common sight, leaving many to question how the rest of the summer may go as elected leaders juggle funding options for critical services.
On May 24, Ramsey County was set to consider an internal loan from its general fund of up to $5.8 million to allow the  Housing Stability Department to continue providing services through June 22, 2022. In January, , the Ramsey County Board approved up to a $5.2 million loan from the county’s General Fund balance to the Homelessness project.
At the time printing of this edition, state lawmakers had not decided how to allocate the state’s $8 billion surplus. At the time of this article’s writing, lawmakers had tentatively agreed to earmark about $6 million per year for Ramsey County’s emergency shelter operations.
But Michels feels like the time of substantial government involvement in homeless shelters may have come and gone, and any  progress to be made on the issue of homelessness will likely come from private funding, which was the status quo prior to the pandemic.
“We’re going back to the model of minimal government funding, and resources are drying up,” Michels said. “And now there’s a greater need and acuity among those we serve.