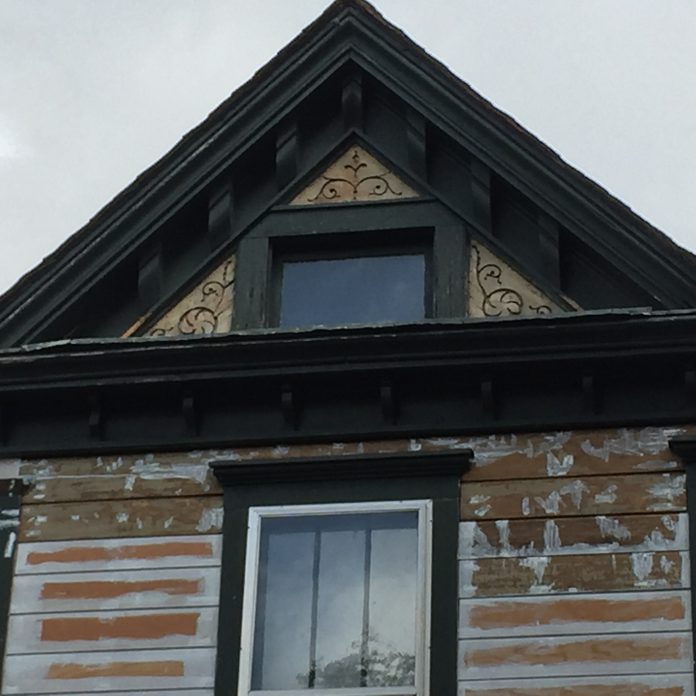 by Paul Bard
When Luke Johanns began stripping away the artificial siding from a tall, 1882 Victorian house on McBoal St. in the spring of this year, little did he know what he would uncover. He found not only the venerable home’s original wood siding, but evidence linking it to one of our neighborhood’s most famous and beloved characters. We’ll get back to that in a moment.
When Luke went looking to buy his first home, he chose St. Paul’s West Seventh neighborhood. “I love the history here and I liked the community a lot. Plus, while it’s becoming more and more popular, with all the new bars and restaurants and the Schmidt Brewery redevelopment, it was still affordable for a guy like me, buying his first home.”
The house at 165 McBoal did not look promising when Luke and his girlfriend Hanna Martin, both recent graduates of Xavier University in Cincinnati, first walked in. “There was an awful lot of clutter,” said Luke. “And unfortunately, some of the Victorian details had been lost or badly damaged over the years.” But in the 10-foot ceilings, the original door and window casings, the curved staircase and ornate old radiators, Luke and Hanna could see hints of the home’s elegant past. So they took the plunge.
As Luke started working on it, the house began to reveal its secrets. On an attic gable at the front of the house, concealed under the artificial siding, he found beautiful carving that matched decorative trim on the house’s double entry doors. He found the original shiplap wood siding to be in reasonably good condition, for the most part. Where it was deteriorated, he was able to mill custom replacement siding with the help of a neighbor. “The neighbors have been really helpful and encouraging,” said Luke. “My parents have helped out a lot too. Since my mom grew up in a historic house, she’s been very supportive of the project and has put in a lot of hours working on it with me.”
Neighborhood historian Jim Sazevich also paid a visit, delighted to see yet another historic home getting the loving restoration it deserved. Jim told Luke about the history of the house, including that, for several decades, it had been home to a particularly well-known family in the West End. Sometime after that conversation, Luke was removing more of the artificial siding from the front of the house and made a discovery. Preserved on the original wood siding was a spot where a young boy, as young boys will, had scratched his name on the wall. It read: “Nick Mancini.”
Nick Mancini, who passed away in 2007 at the age of 80, was a true neighborhood legend. He grew up at 165 McBoal and started the original Mancini’s Bar with his Italian immigrant parents back in 1948. That enterprise evolved into the current Mancini’s Char House at 531 West Seventh St. Nick presided there for many years as the gregarious host who never forgot a name. The Char House is now run by Nick’s sons, Pat and John.
Finding that name on the siding makes Luke all the more curious about what else he might find and all the happier that he chose a part of the city with a rich history. History is all around us in a neighborhood like this — and it’s still being made today. Nick Mancini etched his name in the West End both literally and figuratively. Now, Luke, Hanna and others of their generation are making their mark as well.