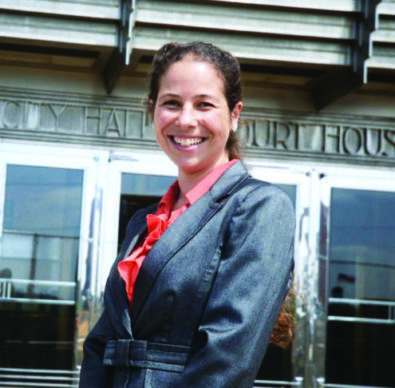 St. Paul City Council Member Rebecca Noecker announced Dec. 15  that she will seek re-election to her Ward 2 seat in 2023.
“I’m running again because I love St. Paul, and I want to keep working to make it an even better place.” said Noecker. “I’m excited to keep working with residents to make our city a place where all children get off to a great start, housing and jobs are abundant, and families feel safe in neighborhoods they love.”
The filing period to run for city council runs from Aug 1-15, 2023. The election is Nov. 7.
Asked what she would prioritize if elected to another term, she pointed to affordable housing, early childhood education and hedging gun violence, a topic that again emerged after the shooting deaths of 18-year-old David Johnson and 21-year-old Ellijah Payne, both of St. Paul, in a building near the downtown Green Line Central Station Dec. 12.
Of the shooting, Noecker said “It’s a call to respond with urgency.”
Bolstering foot traffic and businesses in the downtown area, meanwhile, were among Noecker’s longterm solutions offered to curb violence in the area.
Noecker was first elected to the city council in 2015. She is a resident of St. Paul’s West Side, where she lives with her husband Shane and her two children.