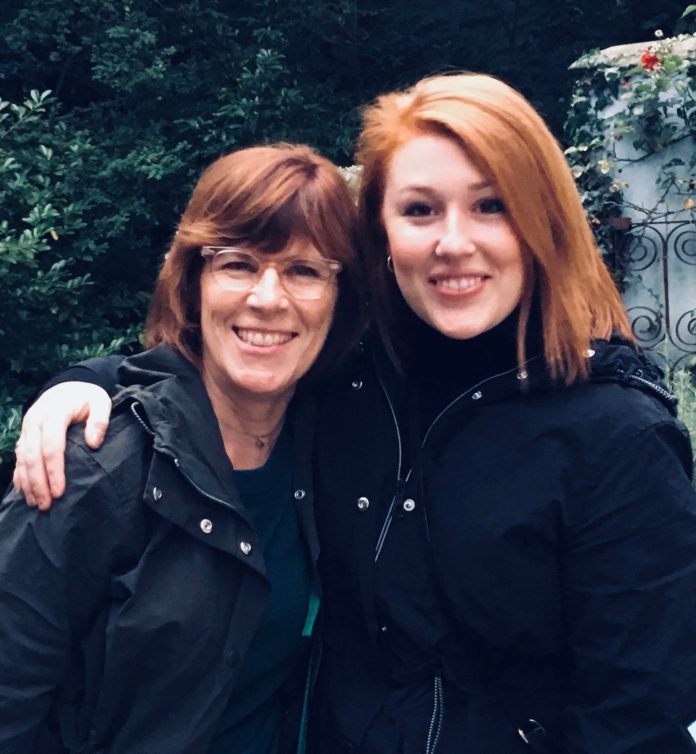 By Casey Ek and Jerry Rothstein
The 400 block of West 7th Street is home to a diverse set of businesses that have grown, adapted and unfortunately shuttered under the weight of the COVID-19 pandemic. Amid those changes have arisen new opportunities for proprietors and customers alike. Collected below is the latest news from the business from the stretch of West 7th.
Not included in this article are interviews from Sophie Joe’s Emporium, a now closed antique store and former community staple, and Foreward, a photo and video production company that seeks to feature its clients through visual storytelling. A story in a future issue will spotlight these two businesses.
“Meet me at Claddagh!”
Mary Hogan-Bard is one of the rare people who has been able to bring her vision to fruition almost exactly as she imagined it, not only in its physical structure, but also in the social, interpersonal sanctuary that came with it.
Claddagh Coffee is celebrating its tenth anniversary this year. Mary began planning it in the years of serious economic distress after the deep 2008 recession, yet the energy and hope she brought to the project motivated others to join in and Claddagh did become a community effort.
She chose the name as a way of honoring immigrants from all the countries whose people saw something in this country that gave them hope. The heart is love; the hands are friendship; the crown is loyalty. Claddagh means all are welcome.
When Claddagh opened, it seemed to take no time at all for it to become the place to go on West Seventh. The environment was beautiful — it felt as if it has always been there. The coffee was more varied and sophisticated than we were used to, and the home-made baked goods were perfect complements to the drinks.
Everyone noticed that all the working team members were happy to be there, and it didn’t take long for customers and workers to get to know each other by name and follow each other’s lives to some extent. This was not an accident. Mary took the time to impart her vision of Claddagh to all her staff — in a way, she wanted them to meet each customer as if that would be the most important contact of the day for them.
Her efforts to offer good paying jobs with flexibility has allowed many students, musicians, artists and writers to stay a part of the Claddagh community while still pursuing their creative lives.
Mary’s daughter Molly Bard is now managing Claddagh, and in similarly difficult times to the origins of the coffee shop, is working to create a new, hopeful enterprise in the space next door that housed the River Garden Yoga Center. Emerald, a wine bar and community gathering spot, will open this fall. Molly and her business partner, Amanda Caruso, are excited about the project and the growing community interest that has arisen as word has gotten out.
To celebrate Claddagh’s 10th anniversary, Mary and Molly are planning a party, now scheduled for Oct. 30, and featuring An Luan, the Irish traditional music ensemble from The Center for Irish Music. Keep an eye on claddaghcoffeecafe.com for the details.

Taking things Day by Day
Day by Day Café, located at 477 West 7th St., like most restaurants in the area has a problem many business owners might welcome: The restaurant is busier that it has ever been, so busy, in fact, that there are not enough staff members to accommodate rapid service.
Restaurants around St. Paul, and indeed the country, are experiencing staff shortages as would-be employees grapple with safety concerns, securing daycare and several other factors borne from the COVID-19 pandemic. This challenge and many others have forced Day by Day to get creative with the business.
Day by Day General Manager Gena Ekbom, whose father Greg Ekbom owns the establishment he started in 1975, says the pandemic showcased her father’s industriousness.
One example of this was the restaurant’s pivot to pizza. Last year, Greg attempted to order pizza from another establishment one afternoon only to find that the next available delivery would not be until 10 p.m. A lightbulb went off in Greg’s head and not long after, Day by Day acquired its very own pizza oven trailer, which as of this article’s publishing remains parked outside the establishment.
Within the restaurant a room beside the kitchen is taking shape day by day. That room will be a built-in pizza oven workspace. Once the workspace is completed, the next challenge will be hiring someone to cook pizzas, a task which may need to wait given the labor market, Gena said. Already Day by Day staff are working around the clock to serve the flood of new and legacy customers.
“The staff we have, they’ve been willing to stick around,” Gena said. “They’ve been willing to work seven days a week or work overtime. The people that are holding us together are the ones that have been here for so long.”
While pizza is not yet a staple at Day by Day, Greg feels it could be one option on which the restaurant could fall back should the pandemic warrant widespread closures to in-person dining again.
“If [the Delta variant of COVID-19] is as bad as it might be, maybe the pizza thing will be a lifesaver this year,” Greg said.
At 70 years old, Greg, like the rest of Day by Day employees, is working more now than he has in decades, Gena said. Aside from the gas and electrical work, Greg is singlehandedly building the indoor pizza workspace.
“He’s an inspiration, for sure,” Gena said. “I want to grow up and be like my dad.”
Gena’s two teenage twin children are about the age she was when she began washing dishes at the restaurant as punishment for acting up. She says their plan is to one day take over for her. They might need to divide their time, however, because they have been known to fight over tips, Gena said.

Customers Prove to be Thrift Store’s Lifeblood
Julene Maruska has been involved with the Society of St. Vincent de Paul’s thrift store, located at 461 West 7th St., since 1987 when she first entered its ranks as a part-time bookkeeper there. Maruska has seen countless changes to the space over the years, but nothing could have prepared her for the challenges the pandemic brought.
Customer loyalty seemed to be at an all-time high when COVID-19 restrictions began limiting foot traffic in the thrift store whose managers aim to bring quality goods at fair prices to its customers. Those customers would often tell Maruska that they would leave their homes solely to visit the grocery store, then the thrift store. Customers would stop in to buy everything from clothing and shoes to picture frames and furniture.
“I’m honestly extremely surprised at how busy we were,” Maruska said.
The parent nonprofit and food pantry, which prior to the pandemic was accustomed to feeding around 4,000 to 5,000 a week, swelled to feeding about 10,000 of St. Paul’s less fortunate during the peak of the early pandemic, Maruska said.
Maruska recalls that in the summer of 2020 when grocery supply chains surged to meet the demands of the homebound millions, the Society began receiving semis filled with food.
When vaccines began to instill confidence in the public around March and April of this year, Maruska began seeing faces she had not seen for a year or more return to the shop, many eager to spend their second stimulus checks.
Since then, Maruska remains busy at the helm of the store that has steadily increased its business hours to weekdays from 10 a.m. to 5 p.m. and Saturdays from 9:30 a.m. to 3 p.m.
As numbers surrounding COVID-19 seem to be trending negatively, Maruska feels the store and the Society are prepared to adjust as needed and is confident her customers will be understanding of the changes that may ensue.
As for the customers themselves, Maruska says over the years, she has seen a major increase in the number of young customers, particularly those under 20, who often come into the store in groups.
“I often joke they like to hunt in packs,” Maruska said.

River Garden Yoga Studios Bids Farewell to Neighborhood
River Garden Yoga Studios closed its doors at the end of last May as a direct result of the COVID-19 pandemic, according to Jeffrey Austin, the studio’s former director.
The nonprofit studio was once home to classes from numerous yoga traditions under one banner and made its classes available to people from all backgrounds. The studio sat empty for about a year and a half before closing its doors for good.
The building that once housed the studio, located at 455 West 7th St., will soon be home to Emerald, a wine bar and gathering space operated by Molly Bard and Amanda Caruso. Molly manages Claddagh Coffee next door.
While Austin says there is no place like River Garden, he is happy to see the space be used by Claddagh, which has become a neighborhood staple.
“They’re a great asset to the neighborhood,” Austin said of the studio’s new inhabitants.
In a farewell message to students published on the studio’s website, Austin encouraged visitors to still contact individual teachers who are likely to find new outlets. Their information can be found at https://www.rivergardenyoga.com/teachers.
Style Society Opens its Doors
When most people think about the effects the pandemic had on small business, many aren’t likely to conjure images of new opportunities springing from the thought. But for Style Society, the pandemic was the perfect catalyst to launch the brick-and-mortar vintage endeavor.
Trio Jessica Goodpaster, Emily Dick and  Ashley Rugel had for some time already been in the rental and floral business for weddings. When the pandemic hamstringed large gatherings, the group began offering their unused inventory at pop-up shops, mostly out of financial necessity, according to Goodpaster. The pop-up events were such a success that the group realized they were onto something, took the endeavor a step further and opened what West 7th community members see today.
“Basically, COVID happened and gave us the idea for the shop,” Goodpaster said. “It was a blessing in disguise.”
Located at 453 West 7th St., Style Society opened in May. Inside shoppers can find items from eras past. Mid-century. Vintage. Boho. These are terms Goodpaster uses to describe the furniture and decorative wares in the store.
“It’s not just grandmas couch,” Goodpaster said.
The trio sources their merchandise from flea markets, thrift stores and wherever else good things come. Furniture in the store is all painted onsite and reflects the latest trends in the industry.
Where modern, mass-produced furniture may be feeble and ordinary, the furniture the trio sells harkens back to an era when quality was queen. The sustainability aspect is just icing on the cake for Goodpaster.
“Vintage dressers are built solidly. They’re still here 50 years later and they’ll last another 50 years if they’re taken care of,” Goodpaster said.
Style Society is open Thursdays from 1 to7 p.m., Fridays and Saturdays from 10 a.m. to 5 p.m. and Sundays from 10 a.m. to 3 p.m.

Modilumi: Always lit
In May, 2019, Lex Winger opened Modilumi at 489 West 7th St., after more than a year of extensive renovations to the historic “triangle and stone” building at Goodrich and West Seventh, once the location of the infamous Raquel’s Rap, a stone in the neighborhood’s side.
We called it “A jewel box of light” when it opened, and Lex’s creative style, which derives from a love of the mid-century modern movement that influenced architecture, furniture and lighting design from the 1930s even to today, continues to produce a variety of lighting incorporating wonderful design elements, colors and shapes.
With a selection of table lamps, floor lamps, pendants, ceiling lamps and sconces, and some furniture as well, Modilumi continues to bring light to the neighborhood.
Currently, Modilumi is open on Saturdays from 11 a.m. to 5 p.m. Information and online sales are available at Modilumi.com. Telephone: 651-600-3470.