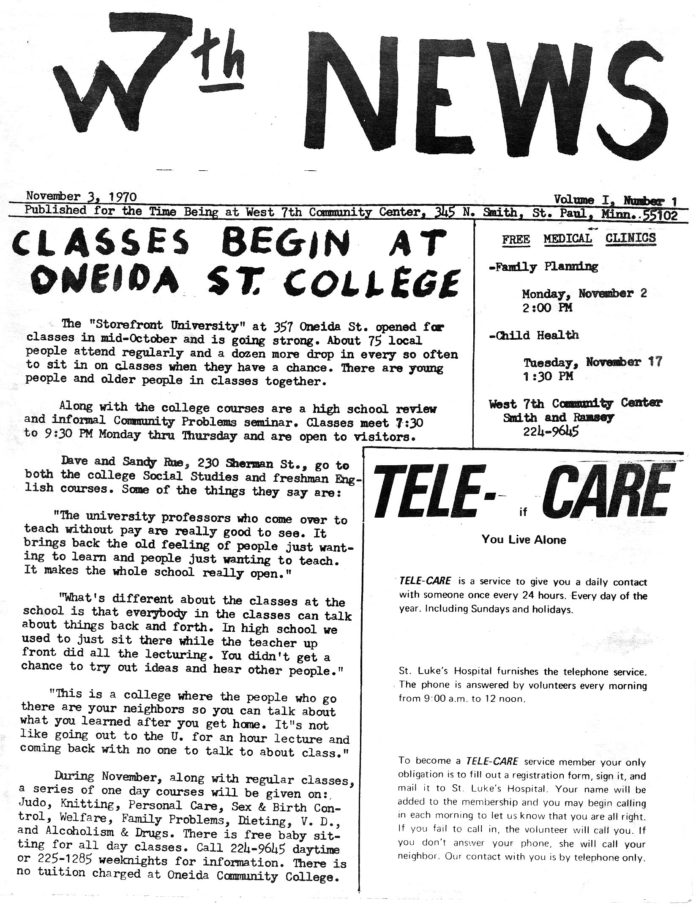 by Margaret Kinney
Editor’s note: In this issue and the next, we are featuring a series of articles exploring the newspaper’s history. See also: Tim Rumsey’s history of the Healthline column.

As the nonprofit Community Reporter marks its 50th anniversary, I have revisited the history of community journalism and involvement that formed the local institution. What I found is that the history of the newspaper closely mirrors the history of the West Seventh neighborhood in which it is based.
“This is disgusting, they are making poor people from different areas of the city fight over crumbs.” This quote from a resident began the lead story in one of the first issues (March, 1971) of the West 7th News, the forerunner to today’s Community Reporter. The front-page article was reporting on the Ramsey Action Program (RAP), which targeted the West End as one of St. Paul’s areas of poverty. Using Congressionally-allocated urban renewal monies, the RAP funded quite a few West End community programs being established by individuals wanting to make a difference in the quality of life for West End residents. But for the progressive voices of the West 7th News, the funding wasn’t nearly enough.
Services for seniors, single mothers, and teens were established, as well as health clinics and programs for legal aid, food distribution, homelessness and affordable housing. The Community Reporter kept residents of the West End informed about the progress being made in each program, updating readers with status reports penned by the founders of the service organizations. The tradition of community and resident-written stories remains a central pillar of the newspaper, centering local social service agencies and grass-roots organizing.
Most of these local organizations that began in the 1970s morphed into what is now the Keystone Community Center, the Fort Road Federation and the United Family Medicine (1026 W. 7th St.) and Allina Health United Family Physicians (233 Grand Ave.) clinics. The dedication of the individuals in these programs and the services they offer to maintain and improve quality of life in our section of St. Paul continues to be a focus of the monthly newspaper.
Some original concepts for the newspaper haven’t changed in 50 years. The original newsletter and subsequent Community Reporter have always sought more funding and volunteers, as well as advertisers and contributors. It had a Bulletin Board, as it does today. It was free then, is free now and remains committed to never erecting a “paywall.” It has always striven to provide a voice for members of the community who wanted to see our neighborhood thrive.
Back then, the language was friendly and informal. 2-line classifieds (some hand-written) appeared here and there, where space permitted. It had a Sound Off page, dedicated to airing folks’ gripes about circumstances in the community. I wonder if some of those features should be brought back.
The newsletter’s first editor, Neal Gosman, wanted the community newspaper to be written by, for and about the neighborhood. At the top of an early masthead, he printed, “William Randolph Hearst had nothing to do with the West Seventh News; isn’t that a good reason for you to contribute?”
While the projects and debates in the neighborhood have changed since then, the newspaper’s role in representing residents’ perspectives has remained the same. In 1972, the Community Reporter newspaper conveyed recurring opinions about the construction of 35E, which ended up slicing through the West 7th neighborhood. (The West 7th Association was intent upon stopping the project from literally dividing our neighborhood into two parts. Members of the association thought the project was too hastily being brought forth and too expensive, calling it “haphazardly conceived.”) More recently, the Community Reporter has aired opinions about the controversial LRT along West 7th Street, sharing perspectives from the Citizen Advocates for Regional Transit and from the West Seventh Joint Riverview Transit Task Force.
As part of Community Reporter’s ongoing recognition of its history, we are seeking recollections of the agencies and programs of the early ’70s, and the role that the newsletter played in their development. The West Seventh Teen Council, Oneida Community College, the Ramsey Rats boys’ hockey club, the Family Planning Clinic and the Veterans’ House were some of the onetime groups reported on regularly. We’d like to add your recollections to our history archives.
Margaret Kinney is a West End visual artist and writer as well as a board member of the Community Reporter newspaper.
Contribute to our ongoing mission:
• Send recollections or other editorial contributions to editor@communityreporter.com.
• Donate to our fundraising campaign and help us grow the newspaper for the next 50 years at givemn.org/organization/Community-Reporter or by sending a check to: Community Reporter, 265 Oneida St., St. Paul, MN 55102.