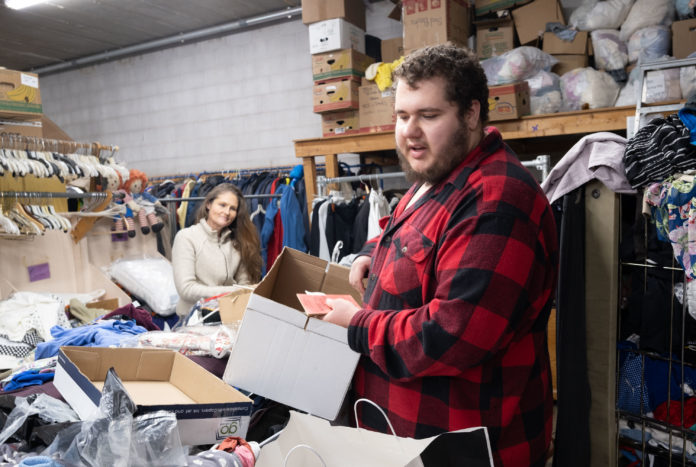 By Casey Ek
Volunteers sorted through heaps of donated clothing in the back of the St. Vincent de Paul Thrift Store at 461 West 7th St. on Dec. 19, 2021. The store is experiencing an influx of donations as winter takes hold. But with increased donations comes an increase in work for volunteers, who could already use a hand, they say.
For Society of St. Vincent De Paul Twin Cities Associate Executive Director, Wayne Bugg, this season comes with unique challenges.
“Especially during Christmas time where people may feel forgotten about, we want to bring a cheer to them,” Bugg said from within the bustling West 7th thrift store.
St. Vincent’s is one of many local organizations who are adjusting to meet the shifting needs of St. Paul’s underserved populations this season. As supply shortages around the world drive the cost of living up in St. Paul, more and more folks are turning to charity services like Buggs’, which is partnered with 30 organizations to distribute food and other goods like Christmas presents. Information about donating to or volunteering with the organization can be found at: svdpmpls.org.
Keystone Community Services, a local food distributing staple, has seen a 56% increase in use of their food shelf programs since August as the price of groceries has steadily increased. Compounding the issue is the increasing difficulty to stock the shelves due to those shortages.
That’s why Keystone is urging the public get involved with their organization in one of three ways: donate; volunteer; or organize a food drive. Information about how do all three can be found at bit.ly/3p9Lokk.
Meanwhile, St. Vincent Thrift Store Manager Julene Maruska says men’s clothing remains sparse for the store that can’t seem to keep it on the racks. She also said that incoming calls for goods among community members have remained at peak levels since the onset of the COVID pandemic.
Bugg, whose organization distributes food to about 10,000 St. Paulites per week, says that while donations to local charities is crucial, many challenges less fortunate St. Paulites are facing are less obvious. One such issue is the need for human contact, which is hampered for all Minnesotans during the winter. Those in need can walk into the thrift store and request a pair of socks at no charge, but many come in simply for the company of others.
“St. Vinny’s is known to be like the Cheers of thrift stores,” Bugg said. “Everyone knows your name. There’s personal contact and connection.”
Maruska said that how to best allocate resources is a matter of communication and cooperation with other organizations.
A few blocks away, the staff at the Freedom House, 296 West 7th, homeless day shelter are familiar with such cooperation. Sara Fleetham, development director of the Listening House, which oversees the shelter, said the facility, which serves as declared emergency area for the unhoused against severe weather, is in constant contact with a litany of organizations. Small Sums, for one, is a group that helps homeless and housing insecure people with work essentials like shoes and trade tools while they accrue paychecks.
On average, the shelter sees about 175 separate guests per day, a figure that may increase as subzero temperatures become the norm.
“In winter, people come in because the literally need to warm up,” Fleetham said.
On Dec. 19, one individual walked into the shelter asking to throw his clothes that had frozen outside into the facility’s dryer.
A challenge unique to this year is the shelter’s uncertainty over whether they will be able to stay open as the Listening House remains embroiled in a lawsuit filed against it and the City of St. Paul by West 7th businesses. The businesses, that include Tom Reid’s and the Art Farm, allege that the shelter’s lack of response to over 100 listed incidents of violence, unsanitary behavior and other public disruptions perpetrated by who they believe are guests of the Freedom House should be grounds for the shelter’s removal from the site. Increased crime in the area highlighted by the recent shooting at West Seventh Truck Park that took the life of 27-year-old Marquisha Wiley and injured 15 others heightened backlash against the shelter.
The businesses are now pursuing a temporary restraining order that would shut the doors of the shelter while litigation is underway. The hearing was scheduled for Dec. 28, 2021, after this issue of the Community Reporter went to press.
While winter seems to mobilize the public to get out and give, Bugg said, “anytime is appropriate to get involved.
“It’s go time all year,” he said. “The reality is people need help all year round.”