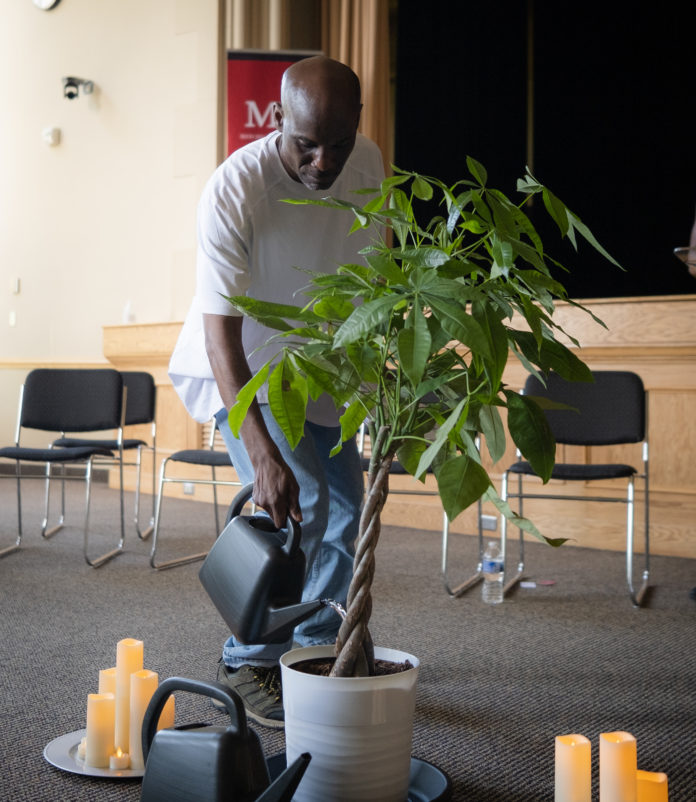 By Casey EkJuneteenth, the holiday on June 19 commemorating the day in 1865 when slaves in Galveston, Texas learned two years after the Emancipation Proclamation that they were free, was a day of celebration in St. Paul, somber reflection and animated calls for reparations payments to those descended from America’s slaves. At a rally at the governor’s mansion that drew a modest crowd who braved intense heat on Juneteenth, local community organizer and vocal proponent for reparations, Trahern Crews, urged President Joe Biden to act on reparations by the Fourth of July. Crews also urged action from Gov. Tim Walz, including using some of the state’s over $7 billion surplus for reparations.
“Reparations is not charity,” Crews said. “Reparations is a debt for 400 years of slavery.”
On June 15, the St. Paul City Council voted 6-0 (Nelsie Yang absent) to form the permanent St. Paul Recovery Act Community Reparations Commission, which will serve as the advisory body to the city council on matters of repairing racial disparities in generational wealth due to systemic racism and its downstream effects. The commission will be tasked with delivering reparations to St. Paul’s American descendants of chattel slavery (ADOCS).
The commission comes together after the city’s temporary reparations committee was formed last July. The committee held a series of public engagement sessions that drew hundreds of residents in both online and in-person settings before presenting their report to the council earlier on June 15.
Reparations in St. Paul might take the form of targeted school loans, down payment assistance, and direct cash payments to St. Paul’s ADOCS and other measures. Reparation efforts, the committee recommended by way of public input, should start with past residents of St. Paul’s Rondo neighborhood. Rondo was a historic center of Black families, community hubs, and businesses that was leveled to make way for Interstate 94. The community also wants to see measurable outcomes for the commission as well as clear partnerships between the commission, the city council and the mayor’s office, according to the reparations committee’s 31-page companion report to the council.
Work on budgeting and staffing the commission is being targeted as part of the 2023 budget, the public hearing process for which will be held this October through December. Funding options for the reparations include American Rescue Plan funds, sales tax, and other measures.
When asked by Ward 2 Councilwoman Rebecca Noecker about the community’s response to prospective reparations via the new commission, committee members said that some residents questioned the feasibility of the new commission’s prospective efforts and were skeptical that body would be an efficient use of time and resources. Some residents stated St. Paul’s ADOCS residents ought to “pull themselves up by their bootstraps,” said Dr. Yohuru Williams, who alongside fellow conveners of the reparations committee Veronica  Burt, and Crews, presented the body’s findings at the city’s Organizational Committee meeting June 15. One audience member at the meeting, however, was attending in support of reparations and said she was there to witness the Organizational Committee “make history,” according to Councilwoman Jane Prince (Ward 7).
Williams, a history professor at the University of St. Thomas, said it will be the new commission’s job to engage in public education efforts for those who may have different brands of skepticism.
“The process of making sure that we educate our community about why this[reparations] is necessary will be absolutely essential,” Williams told the Organizational Committee.
Work on reparations at the federal level, meanwhile, has stalled out in Congress. While he’s disappointed top lawmakers can’t produce action, Williams sees this time as an opportunity for St. Paul to be an early leader for other cities nationwide, adding that if the city were to lay the groundwork for a reparations program, larger bodies of government would be more likely to get on board.
“If we wait for the federal government it’s not going to happen,” Williams said.
Some data show that Americans may need convincing to be on board with funding reparations through tax dollars. A Reuters/Ipsos poll published in June 2020 suggested that only one in five Americans felt the country should use tax dollars to pay for reparations. Data from Pew Research Center suggests Americans are torn over whether cash reparations would be effective in lowering inequality and “about 48%[ of those who say the country hasn’t gone far enough when it comes to Black people having equal rights with white people] say the U.S. government paying cash reparations to Black people who are the descendants of slaves would do at least some to reduce inequality and 51% say this wouldn’t do much, if anything at all,” the study says.
About 40 million Americans are estimated to be eligible for reparations, according to the Reuter’s report.
Chris Tolbert, who represents St. Paul’s ward 3, meanwhile, views the city’s steps toward reparations as exemplary.
“The federal government, the state government and the city are all saying ‘they should do something about it [reparations],’” Tolbert said. “This is St. Paul and our community saying ‘no, we will do something about it.’”