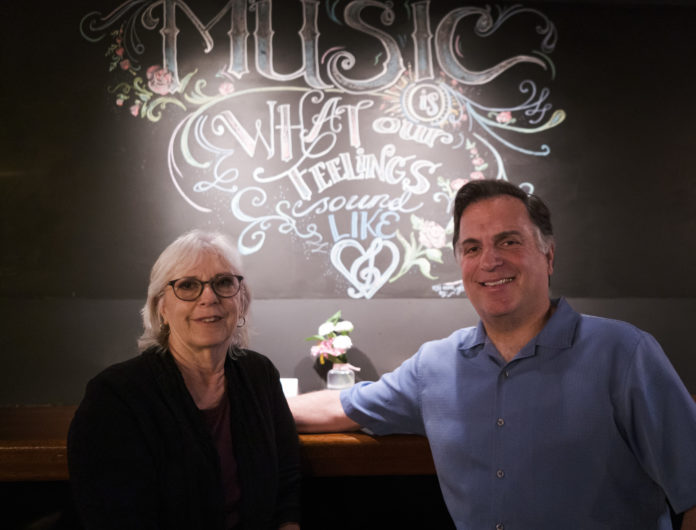 by casey ek
After about 25 years, Twin Cities Jazz Fest luminaries Steve Heckler and Kristine Heckler will be stepping down following the 2023 season. Steve is the organization’s executive director, and Kristine is its project coordinator.
Next season will mark the festival’s 25th year, after which the pair will make their exit. The festival is seeking a replacement executive director. Those interested in the role can submit their resumes, cover letters and three professional references to hsrhits@msn.com with the subject line Last Name, First Name ED Applicant. The new executive director is expected to phase in beginning this November and will switch to full-time next November. Interviews are expected to begin Sept. 20.

History of the Jazz Fest
The jazz festival’s story begins in 1999 in Minneapolis when Steve Heckler and Steve Adams, with the help of the Minneapolis Downtown Council and Jazz88FM’s Kevin Barnes, brought to life a primordial version of the festival to Peavey Plaza where 3000 guests showed up.
The makings of the festival’s eventual permanent move to St. Paul began in 2003 when Steve heckler and Barnes were driving around the city to scope out spots for a prospective site for a St. Paul wing of the then thriving Minneapolis festival.
“We both slammed on the brakes when we saw Mears Park,” Steve said.
So, for the next five years, the festival ran in in both cities until it became clear amid waning support in Minneapolis that pivoting to St. Paul was the best option. In 2009, with the help of Joe Spencer, director of arts and culture with Mayor Chris Coleman’s office, who connected the festival with sponsors, the Twin Cities Jazz Fest made its St. Paul-only debut.
Organizers expected the 2009 festival (headlined by Allen Toussaint and Esperanza Spalding) to draw several hundred people; instead around 8,000 people showed up, and it became clear that St. Paul was the rightful home for the festival for good.
Today, Kristine and Steve get satisfaction knowing they played at least some role in revitalizing St. Paul’s Lowertown area of which Mears Park is the center. When the festival first came to St. Paul, all-day parking was $1 and some buildings abutting Mears Park laid mostly vacant. While there is a fair amount of vacancy in the area today, the jazz festival has remained a draw, and as the city continues to claw back from COVID, the festival will no doubt play a major role in filling the empty spaces in Lowertown. In addition to the main stage at the park being a centerpiece, the two-day festival that kicks off summer brings audiences to nearby businesses to hear youth ensembles and join seminars led by headliners.
Jazz, Steve said, has a unique power to unite the community because of the freedom it allows the musicians and audiences to feel. It’s part of the reason he feels people have come back to the festival year after year.
“It [jazz] allows a musician to go into places you usually couldn’t go. In a nutshell it’s a freedom of expression. The boundaries are not quite what they are in rock or blues,” Steve said.
The road ahead
Now over a decade since the St. Paul pivot, the husband and wife pair have seen just about all there is to see in the world of St. Paul jazz. That’s largely because for the last 24 years, the festival and its behind-the-scenes goings on have consumed their lives morning and night, the couple said.
What began as one whiteboard in their home to help track the logistics of the jazz fest grew to two then three over the years. When Steve is busy finding discovering the next up and coming acts like Henry Berberi, a 17-year-old sax player out of Morris, Minnesota, Kristine might be hiring volunteer coordinators and making sure electronic ticket sales are going smoothly.
With the festival having occupied the last two and a half decades of their lives, the couple is ready to step out of the limelight. They feel assured that their exit will go smoothly because of who they believe are strong leaders within the jazz fest’s ranks and the loyalty of the festival’s sponsors.
Sponsors’ loyalty was put to the test during the 2020 lockdowns when the jazz fest was forced to pivot to virtual shows. These virtual spots got the attention of the national AARP (formerly American Association of Retired Persons)offices who then partnered with the jazz fest. This sent viewership of their weekly casts to over 80,000 worldwide viewers for some shows. The sponsors held strong even before this exponential success, Steve said.
KJ’s Hideaway, which opened last year, became a main host site to this concert series, which has continued since 2020 and is expected to go until at least this December. The establishment is a proper venue for Jazz—though acts of all kinds light up the stage there. A full flight of craft cocktails might leave the hands of a suspenders-clad barkeep. Dim, nearly blacked out lighting gives way to the spotlights on a stage that was unambiguously the focus of the establishment’s layout. On that stage is a proper Yamaha grand piano. Adding to it’s allure is the fact that it is tucked on the lower level of St. Paul’s historic Hamm Building just off Rice Park.
Kristine and Steve were one of dozens of live audience members—there were nearly 1000 remote viewers— at Henry Berberi’s show on Aug.18. There, the pair caught up with the Community Reporter.
When asked about their plans after they exit the Jazz Fest’s official ranks, the former social workers said they’ll spend time with their granddaughter and will find volunteer opportunities, likely with other St. Paul nonprofits. As for what they expect for the  2024 jazz fest, which will be the first that they won’t have a hand in planning, they plan to sit back and enjoy themselves.
“I’m going to be looking at the VIP [lounge staff] and making sure they get me another drink,” Kris said with a giggle that blended with the sounds of musicians warming up on the KJ’s stage.