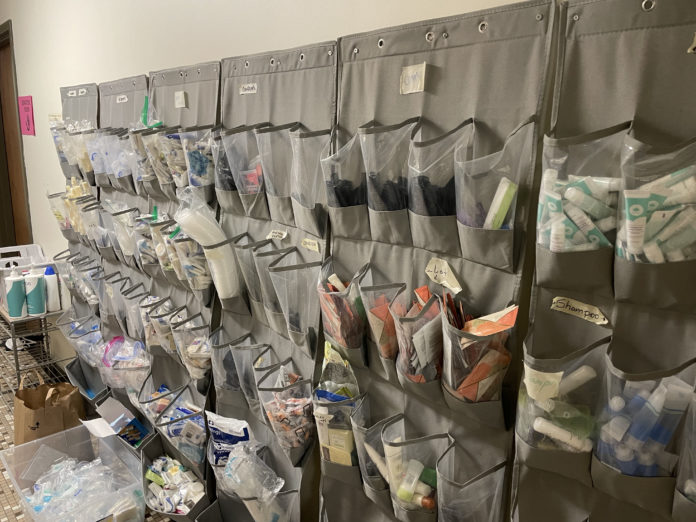 What brought you to this work?
It’s been a long journey for me. I started volunteering in high school with the developmentally disabled. My second job was in a group home providing services for young adults dealing with homelessness. I got a degree in social services with an eye toward pursuing a career in direct care. Within a few years, I had worked in almost every area that social services allows:  corrections, domestic abuse, sexual assault. My passion continued to grow. Not only did I give back, but I also learned from the individuals I was connected with. Two years ago, I made the transition to working with unsheltered guests, working at a shelter called Safe Space.

What experiences in your day-to-day work at Freedom House have the greatest impact on you?
I had a guest that would come often and generate a lot of complaints. I already knew him and had built a relationship from my prior social services work, so I had a good rapport with him. Metro Transit’s Homeless Action Team (HAT) came in looking for this individual a while back because he had a housing opportunity, and if he didn’t accept it, he was going to lose it. I knew he was out and about, so I tracked him down and coached him into taking this opportunity. We had a great conversation about it, and he’s still there. It’s going well. I continue to check in with him every few weeks.
It is especially rewarding to let the people I work with know that they have a connection with me and are seen for the people they are. Earlier today, I was checking a guest in and because I knew him pretty well, I realized it was his birthday. So I went running after him and found him and wished him a happy birthday. He said, “How’d you know it’s my birthday?” I told him about the big celebration we have on June 30th for people with birthdays in the month.
He said I was the only person who remembered his birthday and asked if he could give me a hug. I said, “of course.” A lot of these people’s information is forgotten, so any little thing you notice has the potential to brighten their day.
The guests here—and even the organization itself—get judged a lot. As the expression goes, you can’t judge a book by it’s cover. I encourage people to open up the book and explore it—get involved if you can—because I can guarantee you, it’s not what many people think.

Bekah Bailey, Listening House’s program specialist, grew up in Minnesota with a deep-seated philosophy about the need to give back, instilled in her by her mother. In addition to managing Listening House programs such as its locker rentals, she works directly with guests to connect them with external programs that provide needed resources.

What is the most surprising part of what you do?
Simply being a stable force, a constant in lives that have too few of them. A lot of homeless people do not have stable situations. It’s incredibly rewarding to know that the people you help every day will return the next day, remember you just as you remember them and look forward to seeing you. For some clients, just seeing someone a few times a week who will remember them by name and the ins-and-outs of what they’re going through is motivation.

How did you decide to work in social services?
I grew up adjacent to unsheltered communities. My mom worked in Anoka County for an organization called Family Promise and her whole life philosophy was that we’d gotten so much from others and we needed to give back. She started me on my first volunteer positions working with unsheltered folks. Out of college, I dove into service work, working with refugee students to do a summer school immersion so they could learn US schooling. When I came back to Minnesota, I wanted something that would keep me tied into the community and allow me to give back in the way that I had been taught to.
Are there any guests that you find yourself thinking about even when you are not working with them?
Many of them, but there is one guest in particular who was looking and looking for jobs for so long, and nothing was working out. I felt terrible. Eventually, he ended up getting one but it was a ten hours on your feet job, which he didn’t have resources for. He didn’t have comfortable shoes, for instance. We connected him with a partner organization and within a week he was hooked up with work shoes, a bus card. He’s had that job for three months now. He comes in from time to time and lets me know how work is going.
Anwar, a guest of Freedom House and frequent volunteer from St. Paul, relies on its services for everything from housing applications to daytime sanctuary.
Of the various resources at the facility, what do you find most valuable?
You get state IDs taken care of, housing taken care of, free food, shower, bed, books, TV. Just having the community is the most important thing, though. I volunteer here, helping to clean tables, sweep floors, and in return they often give me metro tickets to go to work. This is a good place for people that are homeless and don’t have food or a place to take a shower. I used to work a night shift at Polar Plastics, and I needed something like this—a place to sleep during the day and shower—but it didn’t exist. I think they should have places like this all over Minnesota. Other places that serve the homeless could learn a lot from Freedom House—how to treat people with respect and kindness and listen to their needs.
What is the most difficult aspect of surviving as a homeless person for people who have not experienced it to understand?
How difficult every part of your life can become when you do not have a base that you can get to your job from. I was homeless for two-and-a-half years until two weeks ago, but I am not anymore, and already things are much easier. I got a bed in Mary Hall. Before that, one of the issues I was dealing with was finding a place that was accessible to where I needed to be. I wanted to find a place to stay in St. Paul because it is where I work and I love this city. The staff at Freedom House helped me with the paperwork.
I am not a good reader, but I can spend a lot of time with a document and figure out what it means. Some people cannot read or write, and they are never going to be able to fill out an application without help. Without this place, I do not know where I would be. I probably would not have that bed in Mary Hall. I probably would not have a job or food until payday.
Now that you have a home, what keeps you coming to Freedom House?
I love it. It is true that I do not have to come here anymore, but I want to. They keep me occupied and away from danger, away from being locked up or being in trouble with other people. That is why I continue to come. I also come because this is like my second home, my family. They are not going to let anything happen to me, and I am not going to let anything happen to them. I volunteer here because I love it.
Even though I have a place to sleep, I am grateful that Freedom House is here because of the resources it hooks you up with. My phone and wallet got stolen last week. The folks here are helping me get my new state ID, social security card and food stamp card. I can get my own phone back by working, but those government programs are a lot more difficult. There is a ton of paperwork.
At most night shelters, you have to wait until the morning to get resources, and sometimes they do not come through like they are supposed to. You are constantly waiting and waiting. A person gets tired of waiting. At Freedom House, there is not so much waiting. Whatever you need, they get right to it. I am going in to get my state ID tomorrow because of them, and I will have my EBT card by Monday. When I heard that, I felt like I was going to cry. If every place could be like Freedom House, I don’t think we would be in the predicament we’re in.