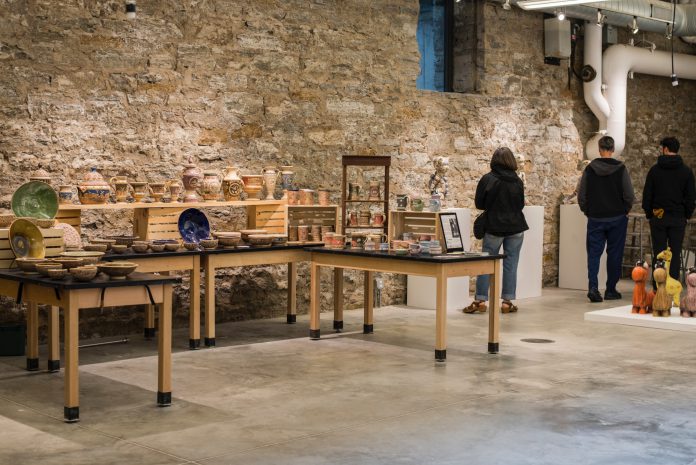 “When you have a handmade bowl, you are connected with the artist.” Thus, Guillermo Guardia starts our conversation as he shows me around the large, well-equipped ceramics studio at Schmidt Artist Lofts, where he lives and works.

His story is a mosaic composed of history, traditions and journey that brought him from Peru to Minnesota. He grew up in Lima in a family where both parents worked and his three siblings all went to college. He is one-quarter Japanese, as one of his grandparents was part of the large Japanese migration to Peru and Brazil in the late 19thand early 20thcenturies.

As a child, he was always making things. He remembers watching Japanese TV cartoons at his grandma’s and making them over in Plasticine, his favorite toy, with which he made all kinds of action figures — so during school he gravitated toward the arts. His last elective in hisBachelor of Fine Arts program in Peru was ceramics — “You got hooked, and wanted to learn more,” — but there were no college programs that fit his ambitions, and he started to explore programs abroad. He found five, was accepted in three, and chose the University of North Dakota, Grand Forks, where he was offered a tuition waiver and a teaching assistantship in a program designed to promote diversity at the school.

At UND he studied ceramics. The program had two or three students aiming for M.F.A.s. While teaching, learning and making, Guillermo began to make connections in the wider community. He became an Artist in Residence at the North Dakota Museum of Art, Grand Forks. He was fully engaged in the complicated immigration process, which ended up taking five to six years, but when he received his Green Card he decided to work as a full-time studio artist.

After fifteen years, feeling the need for a change of environment that would offer new challenges and opportunities to show his work, he moved to the Twin Cities, where he was already slightly familiar with the arts community. He decided not to take a job that first year so he could devote himself to his work, and it was a tough year and he was finding it harder to connect with the people who could help him exhibit in the right places. Later, moving to Schmidt with access to the studio was a major boon.

And he had connected with Northern Clay Center, a gallery and resource for advancing ceramic art through education, exhibitions and artist services that began in 1990. That connection has now gained him a McKnight Fellowship for Ceramic Artists award.

The McKnight “…is designed to strengthen and enhance Minnesota’s artistic community as well as significantly advancing the work of Minnesota ceramic artists whose work is of exceptional artistic merit, who have already proven their abilities, and are at a career stage that is beyond emerging.”

This high point reflects recognition of Guillermo’s powerful work in the ceramic arts community. Whether making a few dozen mugs or a major ceramic figure, “Everything I make says something.” He works with the major issues of these times, drawing from his life as an immigrant, a man of many traditions, an observer of war, violence, displacement.

He uses Japanese forms infused with Peruvian design to produce some amazingly contemporary work. “They could be called ‘Self-portraits.’”

“My art is a representation of my life, my times. The work shows an outside perspective too, as one who came here from another country.” He explores the meaning of “home” from the perspective of having had two already (Peru and North Dakota) and almost three, as he settles in to Minnesota.

To learn more about Guillermo and his work, see moguya.com. He also sells through an Etsy outlet, at etsy.com/shop/MoguyaStudio. Or find him in Instagram, @moguyart and Facebook.