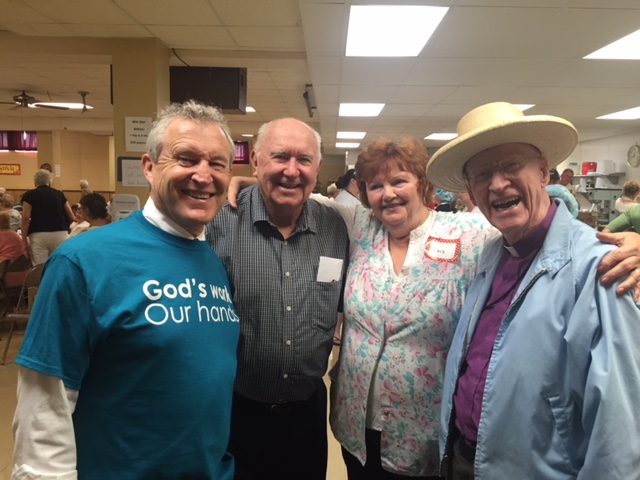 by David Lamb
Pastor emeritus of St. Stanislaus Church, a Catholic parish in the Little Bohemia neighborhood, the Rev. John Calvert Clay guided and inspired thousands to embrace their faith and involve themselves in their communities. He passed away in his sleep on September 13 at the age of 94, in what was only his second year of retirement.
Born in Des Moines, Iowa, in 1926, Clay was raised in New Ulm, Minnesota. As early as grade school he admired the work of a young priest, and he knew it was his calling. By the age of 25 he was ordained. He served parishes in Minneapolis, Mound, Red Wing, Richfield, and St. Paul before settling at St. Stanislaus.
For 48 years, Clay was the community’s leader, and his novel homilies about an expansive idea of God attracted Catholics from across the metro area. An avid reader with an abundance of interests, he drew from a range of theologians in his sermons, bringing a level of accessibility to ideas that might otherwise seem arcane. He published reflections on his faith and life in four books: Dear People Whom God Loves, Surrounded by Love, Awesome Love, and Mysterious Love.
Beyond his work at St. Stanlisaus, Clay partnered with St. Mark’s Evangelical Lutheran Church across West 7th Street for events and outreach as well as with the West 7th Community Center. The center named Clay the winner of the David L. Sons Award in 2007 for his contributions to the community.
Clay is survived by his brother Robert as well as several nieces, nephews and other relatives. Funeral arrangements will be private to support social distancing guidelines, but a virtual funeral will be streamed at https://www.ststans.org at a later date. In lieu of flowers, his survivors ask that you offer a charitable donation to St. Stanislaus Church.