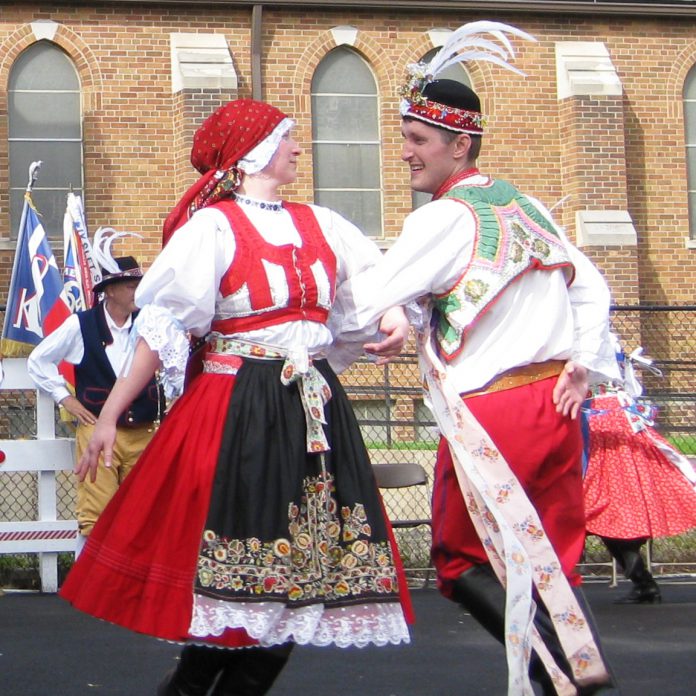 On Sunday, September 15, from 11 a.m. to 5 p.m., Sokol Minnesota celebrates its 30th annual Czech and Slovak Festival. It will again be a gala event, with ethnic food and beer, music, folk dance performances by the children, teen, and adult groups, a gymnastic exhibition, vendors and exhibitors, jugglers, kids’ games and activities, and our annual fabulous silent auction fundraiser. Performances will be on both the indoor and outdoor stages.
On the menu are jiternice (Czech sausage), veprovy karbanátek (pork burger), párky (hot dogs), and three entrees: halusky a kapusta (Slovak dumpling-cabbage-bacon dish), Segedin gulas (pork and sauerkraut stew), and kure na paprice (chicken paprikash). There will also be a Czech salad for a tasty vegan side. All food this year will be outside in the Grill area. The Sweet Shoppe will offer kolace with poppyseed, prune, apricot, cream cheese, and raspberry fillings to choose from, as well as assorted pastries. Beer, pop, and water will be available. Inside, in addition to the bar, there will be Coldstone ice cream, and the Gift Shop will be open.
Two exhibits on loan from the National Czech and Slovak Museum and Library, Cedar Rapids, Iowa, are featured. The Leaving Czechoslovakia exhibit will be displayed on the third floor, consisting of six panels and projecting DVD of preserved stories of 20th century immigrants who fled communist Czechoslovakia. The personal drama conveyed in these stories brings this oral history to life. In the first-floor classroom, the exhibit Sokol Through the Years discusses the stifling of Sokol and development of Spartakiadaat (mass gymnastics events) during the communist years, and the return to Sokol in 1989. The exhibit also covers the creation of Sokol in then Czechoslovakia and its development in the United States. Both exhibits will also be supplemented by personal artifacts and stories of our Sokol members.
This event takes lots of happy volunteers to make it happen. If you would like to help at the festival or getting things set up and organized, call Joyce at 612-822-6147 or e-mail Festival@sokolmn.org. We also welcome items for the silent auction, such as tickets to a concert or event, a week at your cabin, or cooking a Czech or Slovak meal. Everything welcome!