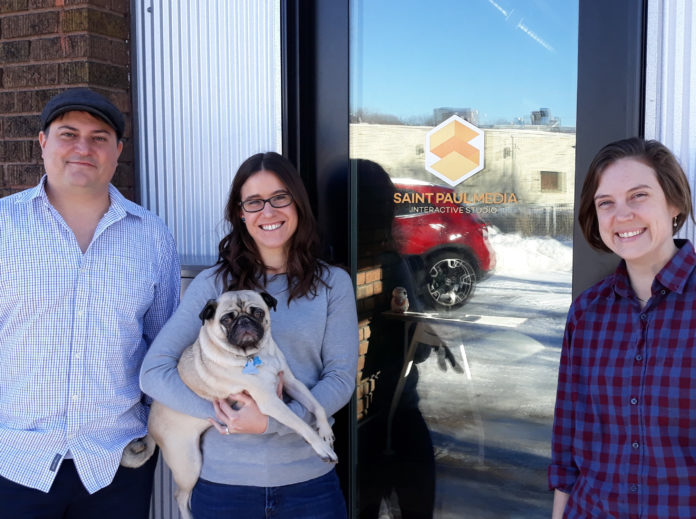 by David Lamb
Jonathan Hatch grew up in the northern Minnesota city of Bemidji, a picturesque crossroads situated near the 400 lakes of the Chippewa National Forest and between the tribal reservations for members of Red Lake, White Earth and Leech Lake.

Beneath the area’s pristine backdrop, as Hatch found, lurked a vein of bigotry. “People didn’t realize my native ancestry,” he told the Community Reporter, describing his life as a teenager, and they would make racist jokes in his presence that at times angered and other times repulsed him.

In 2007, having saved up the funds to move, Hatch looked to build his life in a place that he hoped to find more inclusive. He moved to the West End, and after two years of honing his web development skills launching content-driven websites and earning income from their ads, he eventually decided to start a business in the neighborhood as well.
Hatch founded Saint Paul Media (506 W. 7th St.) in 2009, aiming to create a website studio that could serve the area’s budding nonprofit sphere while reflecting the values that drew him to entrepreneurship in the first place.

“We started working with a few organizations that were conducive to our values, then the others started coming,” Hatch said, citing current clients he proudly helps such as We Are Still Here Minnesota, a group that hosts an annual conference advocating for American Indians. Soon, most of the upstart’s client base was composed of local nonprofits. “When your social beliefs align with the organizations you work with, that’s really special, and that’s something we’ve always tried to keep in mind as we’ve scaled up.”

For Hatch, being a responsible business owner meant ensuring a culture of diversity and involvement. Before he started Saint Paul media, he had become interested in large refugee groups in Minnesota such as Karen, Hmong, and East African people. In 2010, Hatch organized a trip to the camps and nearby small villages in Thailand that such refugees travel through, where he built computer labs. When he planned a trip with the same goal the following year, his creative director, Tasha Klettenberg, joined the effort.

Saint Paul Media has grown in the years since. It now also includes Julianne Raglund, the lead developer, and Sean Froyd, who works remotely in Bemidji, specializing in complex tech support tools. Raglund joined in 2017 as an administrator, but Hatch soon found that she was passionate about development. He mentored her at the process for two to three years until, by his own admission, her skills surpassed his own. The fact that women comprise half of the small company’s staff sets it apart from its competition in an industry—technology—where men have been measured to outnumber women three-to-one.

As COVID-19 shut down workplaces around the nation in March, St. Paul Media experienced a two month lull. While Hatch worked to help set up at-home workstations for his two employees previously stationed in the office, he wondered what he might do to drum up more business. Then, in July of 2020, new development requests began flooding in. As businesses had also discovered, websites had become the primary venue for nonprofits’ work amidst the pandemic. “Suddenly, we were getting way more than we could handle,” Hatch said, “and we were seeing money being invested in websites that we never expected.”

Now, he is looking to hire a new project manager to take some of the load off his existing employees.

As he continues to grow the business, Hatch wants to do so in a way that continues to fulfill the mission he set out on in 2009. “The success is rewarding,” he said, “but I have mixed feelings about the fact that we’re making money, because we’re working with organizations that serve the underserved, the economically stressed. The organizations that come to us usually tell us that the people who need them are having trouble using their services, and if we take their project on, I want to be sure that everything we do is going to help that accessibility.”