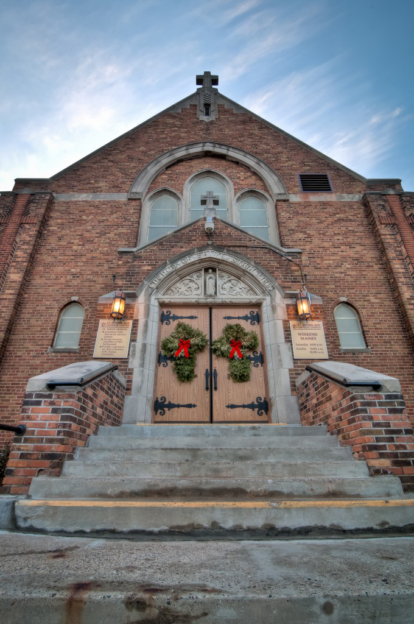 Local staple Tim Rumsey walked to work most days from 1987 to 2000. He began as a form of exercise but kept at it for his love of local lore harvested through his interactions with people on the street. He began documenting his musings and eventually filled 53 pocketbooks with his observations. Here is just one tale.
By Tim Rumsey, MD
April 5, 1934: Palm Sunday. Frank Heller was 13, Raymond 14. The whole Heller family walked back from 9 a.m. mass at their church, St. Francis. After breakfast, Frank and Raymond sat outside on the front steps. Raymond smelled it first. Fire. From the east.
They started walking through the neighborhood. Smoke drifted down the streets. The closer they got to wherever the fire was, the more they heard shouting and timber snapping. Sparks flew overhead. On Michigan, people watered down the roofs and sides of their homes. Three houses caught fire. They saw a huge crowd around the Czech Hall and headed that way. At Michigan and 7th, they saw the fire. A blast of heat and orange flame knocked them backwards. Raymond put his arm in front of Frank and the steeple of St. Stanislaus church dropped to the street in a rumble of brick, wood and black smoke.
St. Stan’s burned all day and night. Firemen stood by with giant lanyards to direct collapsing brick walls towards the interior. All that was left the next morning was a burnt out, smoldering shell.
For three years, masses were held in the school basement, which also became the parish social hall. Mabel Nelson rescheduled her St. Stan’s wedding to St. Francis because the St. Stan’s basement smelled like beer, and she wanted to be married in a real church.
Frank Keller attended the inaugural mass at the rebuild of St. Stan’s in 1936 just to see what a brand-new church smelled like.
1987: The day after her white poodle, Cindy, died, Mabel Nelson fell down her basement steps and fractured her pelvis and two lumbar vertebrae. It was amazing that she survived. The paramedics took her to United. I called her 93-year-old brother in California. I heard his voice start to quiver. He didn’t think he could get back to St. Paul.
Mabel stayed a week at United and then transferred to St. Mary’s Home. Father Clay stopped by. There was talk of her never returning home again. Her house was 120 years old. The only bathroom was on the second floor. The stairways were steep and dangerous. The appliances were old. The wiring and plumbing were old. The house, with which she had become so intimate–her entire 85 years were spent there; she was born there–was now her enemy.
Eventually Mabel did go back home. Her home. Mabel made two ER visits to United for dehydration. She refused to be admitted each time. The residents gave her blood and IV fluids and sent her back home.
Mabel Nelson’s kidneys quit doing their job in the middle of May. Two months of dialysis gave no assistance. Mabel’s body stopped working. I got a call at the office. When I got to the hospital, she was in heaven. I used a phone on the wall of her dialysis room to call her brother. I could hear his moist eyes.
Mabel Nelson may not have had her wedding at St. Stanislaus, but she did have her funeral there. Father Clay mentioned the church fire and wedding story.
1991: Daisy Barret’s son, Bobby, was having a tough time. He had diabetes and high blood pressure. Deep depression didn’t help. He still lived with his mother who had troubles of her own. But her main worry was what would happen to Bobby if she died.
Father Clay made a house call. He gave her a 64-year-old crucifix that had survived the St. Stan’s fire. She showed it to me on my walk home one evening. I held it. It was heavy. Slightly burnished wood and blacked brass. One-and-a-half feet long. I smelled it to see if I could smell what Frank and Raymond had all those years ago. But it just smelled like brass and wood.