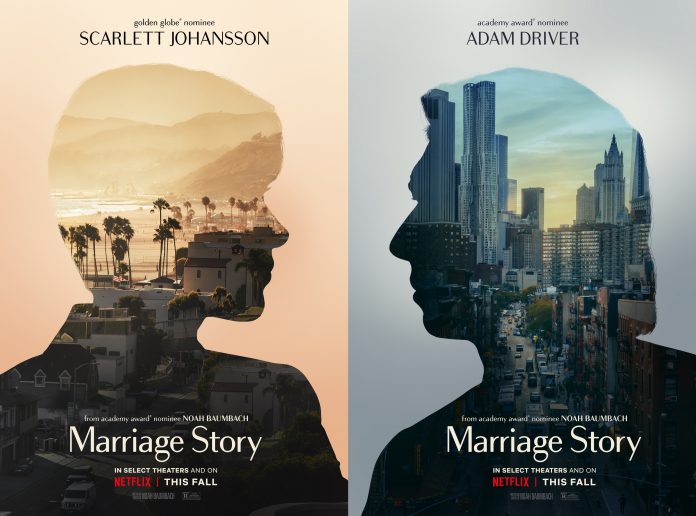 by Zach Murphy
There are plenty of films about couples getting together, but what about the ones splitting apart?
Noah Baumbach’s significantly raw and affecting drama Marriage Story puts it all on the table and stamps the separation in blood. “Divorce Story” might be a more accurate title, but either way, it’s excellent.
Adam Driver and Scarlett Johansson play a director/actress duo. They’re also husband and wife. And they’re not happy together anymore. Divorce papers are served and an intense custody battle ensues. The fallout drops like an anvil and sets off a bitter and depressing chain of hectic turmoil, headache-inducing complexities, and heavy emotions that cut like an unshakable whirlwind of daggers.
It’s messy and complicated. Gut-wrenching and heartbreaking. It’s a painfully honest portrait of what happens when a disintegrating marriage finally unravels. The narrative turns into a mental and verbal boxing match where every move is dirty and every punch is a low blow.
Baumbach’s writing is impeccable here. His whip-smart dialogue hits hard and precise, and it’s rife with conflict and thoughtfulness, as well as bits of humor amidst all the stress. Johansson and Driver are absolutely tremendous, giving memorable performances that scream Oscar awards. There’s a particularly phenomenal scene of a heated argument that takes place about a third of the way through. We witness love turn to hate before our eyes. We witness subtle digs turn into atomic bombs. It’s a real vein-popping-out-of-the-forehead type of scene. It’s a scene that’s so moving and emotionally charged that you’ll be as exhausted as you are impressed by the time it ends. In fact, it was a perfectly cast Laura Dern who did collect the Oscar for Best Supporting Actress. She and Ray Liotta clock in as cut-throat attorneys, and they’re both remarkable here.
Marriage Story is a film of scripts and stages and documents. A film of closed chapters and open wounds. It’s amazing how much power one little piece of paper holds.

Zach is an avid enthusiast of cinema, theater, and storytelling. He lives with his wonderful wife Kelly in St. Paul. You can read more reviews at his blog, Fade to Zach.