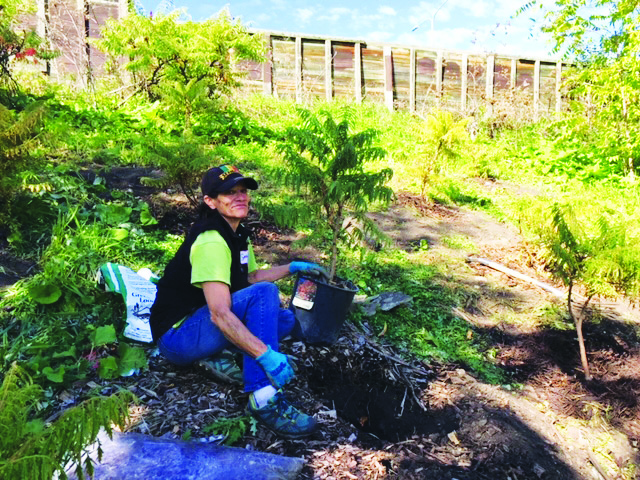 by Paul Bard
A group of 25 neighborhood volunteers took advantage of unseasonably warm fall weather back on Sept. 25 to continue work on phase 3 of a long-term landscaping effort called the Little Bohemia Trail Enhancement Project.
On that warm Saturday, volunteers dug, planted, mulched and watered more than 400 plants, including trees, shrubs and perennial flowers on either side of the Little Bohemia Trail, a bike path that runs along the east side of Interstate 35E between Grand and St. Clair avenues. The project, which has been ongoing since 2015, is the result of a partnership between the Minnesota Department of Transportation (MnDOT), the City of St. Paul and the Little Bohemia Neighborhood Association.
The Little Bohemia Trail runs on MnDOT land, and the enhancement project operates through an arrangement called a “maintenance partnership.” Little Bohemia’s Jenny Gehlhar, who holds a Minnesota Master Naturalist certification from the Minnesota DNR launched the project. Gehlhar explained to the Community Reporter that MnDOT pays for plants while the neighbors provide labor, with the agreement that the neighbors will do the planting and maintain the trail long term.
“This is not a grant,” she emphasized, as she outlined the partnership’s shared responsibilities. “The Little Bohemia Association does not get money—only plants.”
The Little Bohemia group started the project with the help of MnDOT’s Tony Wotzka, who drew up the original landscape design. For Phase 1, in 2015, MnDOT crews removed dead and dying trees as well as ash trees threatened by the emerald ash borer. Crews also repaired sound walls and made other improvements to the site in preparation for landscaping. Neighborhood volunteers then took on the job of planting. In that first year, they put in nearly 1000 trees, shrubs and perennials along the bike path and in Pleasant Place, a small neighborhood park at the corner of Harrison Avenue and Garfield Street. Weeding, watering and other care and maintenance were carried out all summer long. After Phase 1 wrapped up, The City of St. Paul awarded a grant for paving and lighting the trail. Lighting was installed in 2016 and 2017.
Jenny said that the leadership at MnDOT is “totally on board” with the neighborhood’s efforts. While this summer’s drought has not been kind to gardens anywhere in Minnesota, the timing of this fall’s event coincided with the return of at least moderate rainfall in days following the planting. Additionally, neighbors have been watering the new trees, shrubs and flowers wherever possible.
Neighbors who want to learn more about the Trail Enhancement Project are invited to visit the Little Bohemia website: www.littlebohemiastpaul.org/little-bohemia-trail.
Paul Bard is a lifelong St. Paulite. He has served on the board of the Community Reporter since 2017.