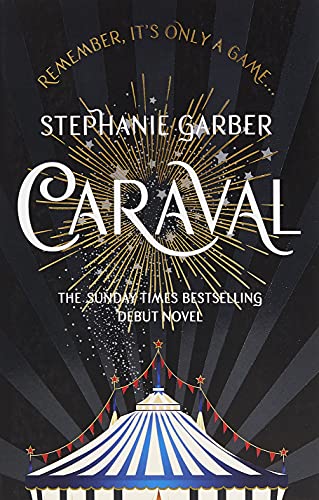 Editor’s Note: You might have noticed that Beatrice Cosgrove is missing from this book review column. That’s because she decided to let her friend Abby Horton rotate into the paper. Now, the two of them will both be contributing to the Community Reporter. Let us welcome Abby to the neighborhood.

Review by Abby Horton
In Caraval by Stephanie Garber, we follow Scarlet as she writes to ‘Legend’, the head of the caravel, a fast sailing ship. At the beginning of the book, Scarlet is shown writing to Legend for many years as it is the dream of her sister Donatella—or Tella for short—to go to the carnival on the mysterious island of la Isla de los Sueños or “The Island of Dreams.’ Seven years after the first letter is sent to Legend, he replies with three tickets to carnival just as Scarlet is to be married to a man she has never met.
Because of their abusive father, the sisters are unable to escape their home until Julian, a local sailor offers to take them to la Isla de los Sueños in exchange for one of their tickets. As soon as they arrive on the island, they find themselves almost locked out of the caravel. Shortly after their arrival Tella disappears, and wild game starts. Much to Scarlet’s surprise, the game is to find her sister, and everyone on the island searches for her in hopes to win a wish from Legend himself. As the games go on, we see Scarlet and Julian form a romantic relationship, and Scarlet starts to fall for him but is scared that Julian might be Legend.  As the games continue, Julian and Scarlet find that their tasks are the easiest of all because of Scarlet’s relationship with her sister, and they end up finding Tella earlier than the rest, but to their surprise Tella is cursed and is made to think that she has met Legend. This book has taught me to not always believe everything. I think this book is amazing, and I recommend it to readers who love mystery and suspense. This book is for readers 12 and up.