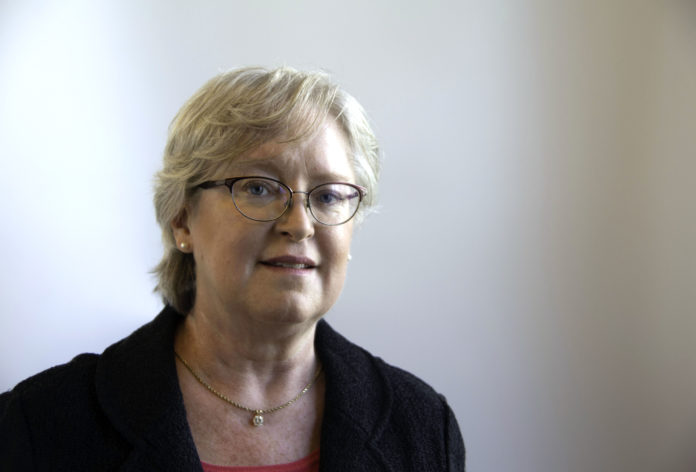 by Margaret Kinney
Diane Gerth becomes passionate when she thinks the character and culture of the West Seventh neighborhood are being threatened. The retired lawyer has been a tireless advocate for our neighborhood since moving here in 1988. It’s one of the many reasons she was recently honored by the Fort Road Federation as a recipient of its 2020 Community Service Award.
Her desire to help maintain West Seventh’s unique urban-pocket livability near downtown St. Paul has manifested itself in numerous community commitments over the years. For instance, after the ethanol plant (now the Schmidt Artist Lofts and Keg and Case Market) opened in 2000, Diane quickly realized, along with many others in the neighborhood, that the surrounding air quality had changed for the worse. She joined the Fort Road Federation board and for the next four years fought for the shutdown of the plant, which finally closed in 2004. “Different members of the board approached the problem in different ways,” she explained. “Because I’m a lawyer, I wasn’t afraid of conflict, sometimes taking a somewhat confrontational role. I was President of the board at that point, so I sometimes utilized my tiny bully pulpit. Being from Chicago may have been useful,” she laughed. “In times of struggling for the betterment of the community, we don’t all have to use the same approach, as long as we share the same ultimate goals, which in that case was breathable air. Since then my style has changed. That ethanol thing was just so bad. It’s easy to say no to an obviously bad thing.”
Diane had more quiet roles during her long service on the Board of Directors of the West Seventh Community Center, from 2007 to 2015, and she now continues serving with its successor, Keystone Community Services, helping to direct essential food and providing services for all, from youth to seniors. Diane has also been a Community Reporter board member since 2017.
From 2008 to 2016, when she served on the City of Saint Paul Capital Improvement Budget Committee, Diane pushed for the rehabilitation of the Palace Community Center. It is now one of the gems on St. Paul’s “Most Livable City” page, offering a fitness center, ice rink, event space and play areas. “I kept pushing for the money to be there,” she said.
While retired from her law practice, Diane remains an advocate for local businesses, pedestrian safety and, “keeping the things we want that make West Seventh desirable.” When she’s not accomplishing committee work, Diane spends her retirement enjoying her neighborhood and home, working in her garden and “raising her girls” in her backyard chicken coop. She says, “One of the things I really love about West Seventh is the number of small businesses, owned by people who know and love this neighborhood. The Riverview Corridor project represents a huge threat to the character of our community. The West End is not just a place to travel through. We live and work and raise our children here. I get excited about West Seventh’s past, and I’m excited about its future.”